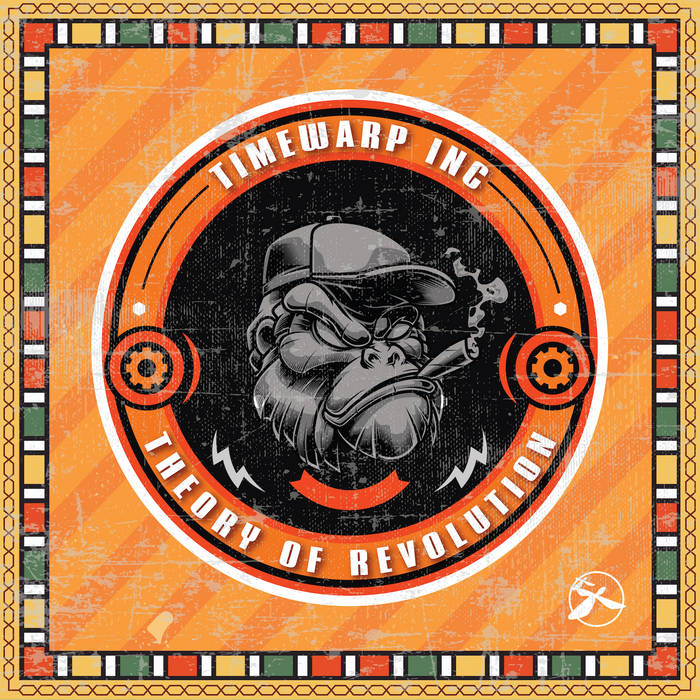 After a long time in the waiting line, we are thrilled to present the fourth full length album from Timewarp inc. Yes indeed, this time on wax with a limited 250 copies double 12” black vinyl edition, packaged on a heavy duty gatefold. Yes we are proud to say that this is our third vinyl release to date. Theory of Revolution is a strong album release, bringing 19 freshly produced tracks. A few of them where previous released on singles and ep’s and only on the digital domain format though the past years, most of them gained great success & big attention, with many playlists from dj’s and radio stations all over the world.

Timewarp inc (aka Angelos Timewarp Stoumpos) managed to provide many new tracks, along the already released ones, while he also managed to remaster them and tried to give a fresh breath to his “old gold” tracks that are still hot and playable out there.

You can expect a wide range of styles and tempos in this album, from dub and reggae to funk and disco, downtempo to house, and from soul to tropical electronica, all produced and based on wide range and borderless music concept, surrounded by some well cooked mediterranean characteristics. All blended with his unique style of producing, mixing and mastering at his “audiophile analogue studio” in Athens.

Featuring artists gave their touch on the album songs. Georges Perin contributes on four songs: Theory of Revolution, I’ll Be Ok, Realistic (yes, here he also plays the harmonica) and on Tropicaliente with his great talented voice and unbeatable vocals. Jammaroots contributes on Restart and she provides a wonderful and anti-political riddim jam with her great vocal skills. Gobey contributes on Liberty is Our Destiny with his riddim and everything sparkles out the good vibes, while RSN gives a few delicious scratches.

The Mage provides his story telling on Economic Boom by bringing his warm trip-hop vocals while Beatride plays the hammond hook. Fanis Karoussos brought his talent over Smoke Miash with his amazing anatolian Santur and his master playing skills. Also we have two remastered versions especially for this vinyl album release. Emma Anagnostou participates on Afrofunk with her etherial soul, funk vocal while George T. provides the warm baseline. Salomi Vasileiadou contributes with her amazing performance vocals on the song Yuil Disco Breaks while Dj Tzinas carries the trumpet hooks. Multi instrumentalist George Mitsikaris performs with his Sitar, Tabla and Bansuri Flute on the track Dubwarp. Timewarp Junior (Morpheus) takes the microphone for the first time and he shoots a few words over Tropicaliente. While the seven times DMC champion Sparky T. bring his turntables and scratching skills over four tracks. Alex Ioannou aka Alex The X-King the most wanted main performers on the album provides his great guitars melodies, hooks and riffs on the most album songs but he also brings out a few base lines and the sweet tropical Yukelele sound. Tasos Fotiou appears on Dub in Disco with his sax section, on Reggae on Dope with his silver flute and again with his sax over Yuil Disco Breaks. Niles Philips lents his huge beats for the new version of Bullshit. Nikos BJ and Fanis P. contributes on tracks Afrofunk and Soulfiction with their guitars.

The vinyl will be available at our Website & Bandcamp store and at our Discogs page.

Timewarp inc - Theory of Revolution (Double 12” Vinyl) will available for sale exclusively on our: Website / Bandcamp store and at our Discogs page:
www.discogs.com/seller/TimewarpMusicLtd/profile

All rights of the producer and the owner of the record reserved. Unauthorised copying, hiring, public performance and broadcasting including burning or uploading to the internet of this record is strictly prohibited.

The producers that complete Timewarp Music family are spread all around the world. ... more